For more than a century, human brain tissue has been stimulated during neurosurgery, leading to all kinds of effects on conscious perceptions and emotions. We show that the brain's intrinsic functional-anatomical organization powerfully explains the highly heterogeneous effects throughout the brain
Kieran Fox
MD Candidate, Stanford University
Follow
Like Be the first to like this
0

Intracranial brain stimulation in humans elicits a large variety of perceptual, motor and cognitive effects. Fox et al. show strong links between the distribution and content of these responses and the brain’s intrinsic network architecture.

“The problem of neurology is to understand man himself” wrote the legendary neurosurgeon Wilder Penfield. The quotation, chiseled into a stone wall at the entrance of the Montreal Neurological Institute (MNI), greeted me every day when I entered the building for lectures in undergraduate neuroscience. To study the brain at McGill University was to be surrounded and saturated by Penfield’s spirit. He’d founded the MNI in 1934 and served as its first director; his words adorned its entranceway; even the street on which I used to walk to class was named after him. And of course, we studied his seminal research papers.

Although famous for curing countless epilepsy patients, Penfield also pioneered the systematic application of what we now call intracranial electrical stimulation (iES)1,2 or direct electrical stimulation (DES)3. IES of brain tissue in awake patients undergoing neurosurgery often leads to reportable or observable changes in behaviour, like emotions, body sensations, and muscle movements4. Penfield combined data from his hundreds of patients to produce functional maps of the human brain half a century before non-invasive neuroimaging could provide anything comparable. His most famous finding was the somatotopic organization of the primary sensory and motor cortices5 – the now well-known ‘homunculus’ or ‘little man’ in the brain – but he also explored how iES could reveal the mechanisms of more complex processes like long-term memory6 and consciousness7.

As a young neuroscientist-in-training, Penfield and his iES experiments loomed large in my mind as the highest exemplar of pioneering neuroscientific research. But in retrospect, my fascination with iES began long before I went to McGill. When I was a kid growing up in Toronto, the Canadian government produced a series of brief ‘Heritage Minute’ clips for television, cramming in a little Canadian history between all the cartoons and commercials. I guess they had the desired effect. To this day, I still have a vivid memory of a Heritage Minute in which Dr. Penfield stimulates a woman’s temporal lobe during neurosurgery and she reports smelling burnt toast; Penfield thereby localizes her seizure focus, removes it, and cures her epilepsy. Little did I know at the time that my first iES paper, published in 2018, would focus on hallucinated smells elicited by iES of the orbitofrontal cortex8.

When I attended McGill in the early 2000s, however, Penfield was long gone and the innovative iES work was now being done far away, at hospitals in France and California. I eventually forgot about this particular passion and moved on to do my PhD on meditation and mind-wandering in Vancouver. But at the Society for Neuroscience meeting in 2013, I walked into the middle of a talk by a Stanford neurologist who was using iES to perturb consciousness in all kinds of intriguing ways9,10. Although only halfway through my PhD (in an unrelated field!), I told Dr. Josef Parvizi I wanted to come work with him when I was done.

When I got to Stanford four years later, I immediately read through every iES-elicited report from a decade of Dr. Parvizi’s epilepsy patients. My own area of expertise and interest was the default network – the set of regions most implicated in mind-wandering, memory, and dreaming11-14 – but the lab had just discovered that iES of the default network didn’t seem to lead to any effects whatsoever on behaviour or subjective experience15. The earliest pioneers of iES had also noted such ‘silent’ regions, apparently unresponsive to iES, in the prefrontal cortex16. The default network claims a considerable part of the frontal lobe’s real estate, nestled alongside other high-level associative brain networks17, and I began to wonder if there might be a pattern here.

Eventually we decided to map every iES effect Dr. Parvizi had ever observed – and also all the null effects – throughout the entire brain and get to the bottom of these bizarre patterns of ‘silent’ and ‘responsive’ brain regions. Needless to say, this was a huge project I never could have completed on my own, but luckily I was surrounded by many curious and capable colleagues at Stanford and beyond who were happy to help.

The result was the present study and the discovery that the brain’s intrinsic network architecture is a major determinant of the type and frequency of iES-elicited effects2. More specifically, intracranial electrodes implanted in ‘higher’ brain networks involved in the most abstract forms of cognition and attentional control are the least likely to lead to any reportable changes in behaviour or experience when stimulated. When stimulation of electrodes in these transmodal networks does occasionally elicit effects, they tend to be complex and heterogeneous – consistent with the flexible, multifunctional nature of these brain networks18. There are potentially important implications of these findings for patients suffering from serious neurological and psychiatric disease. In some of the most intractable forms of neuropsychiatric illness, electrodes are permanently implanted in patients’ brains in an effort to modulate mood, obsessive-compulsive urges, and other aspects of experience and behaviour – so-called ‘electroceutical’ interventions19. A wide variety of regions and stimulation parameters has been tried, but unfortunately, it has proven very difficult to obtain reliable relief for patients20,21. To date, the brain’s network architecture has had only a very limited role in determining where to place these electrodes, but our study shows definitively that the network properties of the stimulation site are of crucial importance in predicting whether or not iES will have any effect on a patient’s experience. An increased appreciation of the role of the brain’s intrinsic network architecture could not only help explain why electroceutical interventions in particular brain regions have failed to yield any benefit – it could also suggest new avenues for future interventions.

For me, the most interesting aspect of this work was the integration of data from so many different domains and methods in order to address foundational questions about how the mind is instantiated in the brain. There is an ancient Indian parable about a group of blind men all touching a different part of an elephant, yet each trying to draw a general conclusion about the elephant’s essential nature. The man touching the elephant’s ear concludes that it is like a fan; the man touching its leg concludes that it’s like a tree trunk; and so on. None of them gets at the elephant’s true nature because they do not combine their experiences, nor do they even appreciate that there is a larger context to be considered.

In the otherwise rapidly progressing realm of neuroscience, human consciousness remains very much the proverbial elephant in the room, an embarrassing enigma that scientists cannot seem to crack with even the fanciest tools. Our study underscores the fact that combining data from highly disparate methodologies can yield compelling and surprising insights into the mind. No matter how we ask the questions, we are interrogating the same baffling and awe-inspiring biological system, and on a deep level, mind, neurophysiology, and metabolism must all be aligned. Whether we ask people to report on their subjective experiences, or inject electric current into brain tissue with iES, or measure blood oxygen levels with fMRI, we are essentially just asking the same eternal questions about consciousness in different ways. The quantum physicist and Nobel Laureate Werner Heisenberg wrote: “We have to remember that what we observe is not nature in itself, but nature exposed to our method of questioning” – and nothing is so complex as the nature of the human mind. I hope that our study helps demonstrate, in some small way, that combining multiple methods of questioning is a profitable path for exploring the enduring enigmas of human nature and behaviour.

If you're interested in learning more, see the original study and my personal homepage. 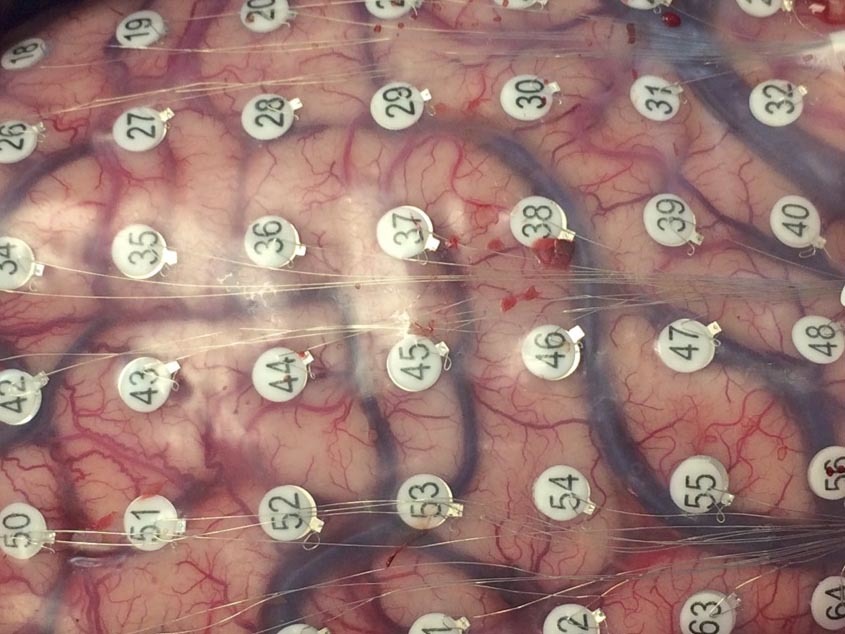 For more than a century, human brain tissue has been stimulated during neurosurgery, leading to all kinds of effects on conscious perceptions and emotions. We show that the brain's intrinsic functional-anatomical organization powerfully explains the highly heterogeneous effects throughout the brain