What animal is the most successful predator? When I ask visitors to the lab, most respond with charismatic megafauna – a fierce lion chasing down a gazelle, or a pack of wolves encircling a lone caribou. While these feats are impressive, the dragonfly zips past the competition to snatch top-prize.
Benjamin Lancer
Postdoctoral Research Fellow, Washington University in St. Louis
Follow
Like Liked by Evelina Satkevic and 1 other
0

Dragonflies are reported to successfully catch up to 97% of their targets, using clever interception paths that predict prey’s future location. Undaunted by swarms of potential distraction, they hunt within visually cluttered environments like the riverbanks they call home. What’s more, dragonflies do all this while performing aerial acrobatics that would impress Cirque du Soleil.

A human would find this an impossible task. At the Royal Adelaide Showgrounds in Australia, I stepped into transparent plastic telephone box with a large fan on the bottom, filled with multicoloured rectangular papers -- and one $100 bill. At a $1 ticket price, it seemed too good an opportunity to pass up. How hard could it be to reach out and grab the bill in 60 seconds? Even with the fan on, and the multicoloured papers forming a kaleidoscope across my retina, all I had to do was reach out and grab it. Perhaps a dragonfly would have fared better than I did!

To understand how dragonflies successfully track prey in such distracting conditions, we probe the optic lobe, an area of the insect brain responsible for processing visual information. With glass electrode tips 1500-times thinner than a single strand of human hair, we pierce into individual neurons and record their electrical activity. Here, we find neurons responsive to prey-like targets, including one called ‘Centrifugal Small-Target Motion Detector 1’, or ‘CSTMD1.' Previous research has shown this neuron exhibits two properties extraordinary for the dragonfly's small brain - which has around 2 million neurons (compared to humans, who have around 86 billion neurons). The first property we observe is ‘prediction.’ When a prey-like target zips across the dragonfly’s visual field, some neurons encode the area ahead of the target, exhibiting an enhanced sensitivity in this region and suppression elsewhere. This likely prepares the dragonfly to respond to an imminent target and forms a prediction of the prey’s trajectory, even if it becomes obstructed (such as when it flies behind the leafy branch of a tree). The second property is ‘Selective Attention.’ When presented with a pair of rival targets moving on different trajectories, a dragonfly must choose only one for lunch, or risk missing both. In a winner-takes-all manner, CSTMD1 responds to just one of the rival pair, encoding the target’s trajectory in a train of electrical impulses, ‘spikes’, unperturbed by the presence of the rival distractor.

But is distraction always a bad thing? For a dragonfly, too rigid attention to any one target could lead to missed opportunities for an easier, more nutritious meal or, even worse, missing a nearby predatory bird.  To study how the dragonfly brain balances attention and distraction, we recorded electrical activity from CSTMD1 while showing the dragonfly computerized movies of prey-like targets moving on rival trajectories, and asked how it would allocate selective attention to different combinations of targets appearing and disappearing.  We found that when a pair of rival targets are presented together, the dragonfly brain generates an independent 'spotlight' of enhanced sensitivity for each target, complete with prediction, regardless of which is selected. Though initially this predictive enhancement for the rival distracter does not influence CSTMD1’s response to the chosen target, it becomes apparent when the chosen target disappears. Attention is then able to quickly and easily switch to the previously ignored target, without a period of confusion, delay, or the need to ramp up a second response. This ‘preattentive’ tracking of non-selected targets could be critical in allowing the dragonfly to keep track of other potential prey or predators while engaged in an active pursuit for one target, allowing the dragonfly to freely switch targets with ease. If the dragonfly does decide to switch targets, its commitment is absolute. Encoding and prediction of the original target trajectory becomes less sensitive as the system ‘locks-on’ to the new target, reminiscent of the 'Inhibition of Return' previously only observed in human, primate, and avian research. The dragonfly's ability to preattentively encode the trajectory of multiple targets and switch with minimal loss of time or delay may explain its remarkable predatory success.

To make the cut for its very own predictive hotspot, a target must remain on a consistent trajectory long enough to generate one. Such a heuristic acts as a kind of filtering gateway that ensures only potential targets (prey, predators, and conspecifics) can become competitively available for a switch of focus. Transient and inconsistent stimuli are ignored - even when highly conspicuous. This affords the dragonfly a balance between attention to one target and flexibility, allowing the world’s most successful predator to ignore other forms of visual distraction and keep its eyes on the prize.

Prediction, attention, and filtering are all important components to any visual system, but doubly impressive in the small brain of an insect. Learning how the dragonfly brain achieves these remarkable abilities with so little hardware and in such a short timeframe (most pursuits lasting around a few hundred milliseconds) could help revolutionize our own engineered visual systems, from the computer vision algorithms in self-driving cars and delivery drones to the potential for biologically integrated visual prosthetics. 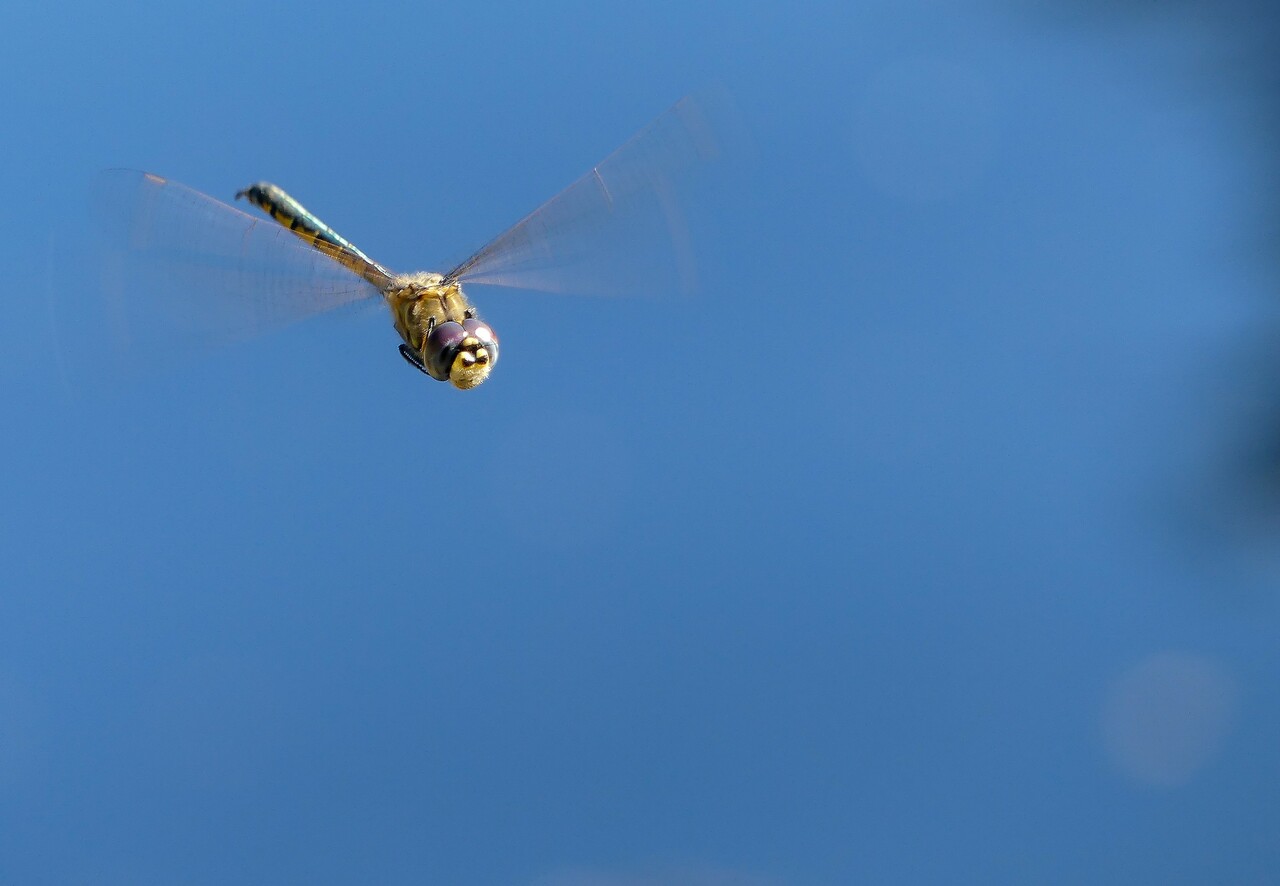 What animal is the most successful predator? When I ask visitors to the lab, most respond with charismatic megafauna – a fierce lion chasing down a gazelle, or a pack of wolves encircling a lone caribou. While these feats are impressive, the dragonfly zips past the competition to snatch top-prize.