Nature Energy - Improved energy access can bring socio-economic benefits, yet these may not be evenly distributed within the household. Zhang et al. conduct a large-scale survey in India and find...

To build a more sustainable and just world, the United Nations adopted the 2030 Agenda for Sustainable Development in 2015 and developed 17 Sustainable Development Goals (SDGs) to end extreme poverty, reduce inequality, and protect the planet from irreversible climatic change. The SDGs gained broad consensus amid rising tensions between economic growth and environmental degradation at both global and local scales. They became important report cards to achieve the triple bottom lines of economic development, environmental sustainability, and social inclusion. Among them, Gender Equality (SDG 5) and Affordable and Clean Energy (SDG 7) are crucial measures of the progress toward inclusive and sustainable economic development.

Energy access is broadly accepted as beneficial to economic development, but few studies have examined how benefits are allocated within the household, especially in the Global South. A vast literature has shown that access to clean energy delivers broad socio-economic benefits, such as increasing per capita income, reducing poverty, promoting children's educational attainment, lowering health risks from household air pollution, and increasing media access. Women, in particular, stand to reap large benefits from clean electricity and cooking energy in terms of time use, access to information, and intra-household relations. But the gains are highly context-specific and not universal. Little is known about how intra-household dynamics contribute to the heterogeneous relationship between gender and energy access across studies. A better understanding of the gender gap in energy access and use could unlock additional support for sustainable energy policies and bring in a gender lens to the implementation process.

Of the millions of people impacted by energy access challenges, marginalized populations suffer to a greater degree than others. Women stand out among them with limited access to resources and visibility in the energy policies. Gender inequality remains one of the greatest challenges to unlock the full potential for human development. Progress has slowed in recent years, and based on current trends, it would take 257 years to close the gender gap in economic participation. In India, women's empowerment has lagged behind the progress in economic development. The 2021 Global Gender Gap Index ranks India 140 out of 156 countries and identifies significant economic participation and health gaps. The economic gender gap, in particular, has widened over recent years. This could have significant implications for the energy sector through reductions in appliance demand, clean cooking access and affordability, and women's health outcomes. SDG 5 recognizes that economic development can not be sustainable if one-half of humanity continues to be denied their full human rights and opportunities.

To study the gender gap in energy access and use in the Global South, we conducted a large-scale survey with 4,624 rural and urban slum respondents across 58 districts and six states in India to provide results on intra-household differences across multiple outcome dimensions of energy service, including knowledge, satisfaction, utilization, and opinion. Home to 17% of the world's population, India has made remarkable progress toward universal electricity access in recent years. Since 2000, more than 900 million citizens have received electricity connections thanks to ambitious government programs such as Saubhagya. Nearly 97% of households are now connected to the grid, and the average daily supply is 20.6 hours. As of 2022, 90 million households have received subsidized LPG connections.

Despite near-universal grid access, significant challenges remain for achieving the SDG 7 goals of reliability, affordability, and sustainability. Unanticipated outages and billing/metering issues are common in rural areas due to high transaction costs. In addition, 80% of the current energy demand is still being met by coal, oil, and solid biomass, and more than 300 million Indians rely on solid fuels for cooking. These statistics highlight the need to improve our understanding of effective government policies for accelerating the transition toward more sustainable energy sources. Beyond energy access, significant gaps remain in women's economic participation and health. The six sample states, Bihar, Chhattisgarh, Jharkhand, Madhya Pradesh, Rajasthan, and Uttar Pradesh, are among those with the lowest socioeconomic condition and highest health burdens from household air pollution. As such, our findings could provide new insights on making sustainable energy policies more inclusive in the Global South.

Since households may differ in many unobserved characteristics affecting both energy access and gender-specific outcomes, a naive comparison between males and females across households in the cross-section is likely to yield biased estimates for the gender gap in energy access and use. To address this challenge, we survey women and their spouses in the same household, thus allowing for intra-household comparisons while minimizing the influence of time-invariant unobservables at the household level. To understand how existing power dynamics between men and women in the household affect gender disparities, we build upon existing global instruments to create a Women's Empowerment Index (WEI) to measure the level of gender equality within households in our sample. Our index encompasses six dimensions on Knowledge, Social Norm, Work, Time, Money, and Power. For each indicator, households are ranked as low (1), medium (2), or high (3) empowerment based on their survey responses. Drawing on existing women's empowerment indices, the cutoff for low empowerment is around the 20th percentile and that for high empowerment is around the 80th percentile for each indicator.

We find evidence of multi-dimensional gender inequality in energy services within Indian households. Women in low empowerment households are significantly less likely to have heard about energy services. The gap in awareness manifests in differences in satisfaction. Women in higher empowerment households tend to be more unsatisfied with energy services, such as home and community lighting, compared to their husbands, implying higher expectations of quality. Moreover, we find that the overall progress in electricity access does not eliminate the gender gaps in usage. Women in low empowerment households are less likely to use electricity during most of the day except in the morning between 6 am to 12 pm. This echoes prior findings that access to electricity tends to exclude the needs of women. Power dynamics between husbands and wives is an important mechanism behind the gender inequality in awareness and usage, as women in high empowerment households have the smallest gender gap in energy access. Differences in awareness, usage, and satisfaction also generate divergence in preference and opinion. Empowering women has the potential to unlock additional support for sustainable energy policies by raising awareness and agency and eliminating energy poverty globally.

For policymakers, these results signify that goals for affordable clean energy need to be inclusive and realistic about the context of implementation. To the extent that household dynamics affect resource allocation, policymakers should consider a targeted approach that accounts for existing gender imbalances. In particular, to increase the adoption of PMUY and LPG, outreach programs could target women in low-income and urban slum households as they show the largest awareness gap. Power companies could consider gender-specific plans in the implementation of schemes and processes to increase consumer satisfaction because a gender-neutral approach is unlikely to capture the whole picture. To sustain and enhance consumer satisfaction, they should improve service quality, especially among women. Subsidizing energy-efficient fans and TVs (female-intensive appliances) may achieve a greater uptake among women, who are more concerned with the cost of electricity. As empowered women can access energy differently, an intentional gender lens in access to energy can also empower women leading to improved social and economic outcomes. 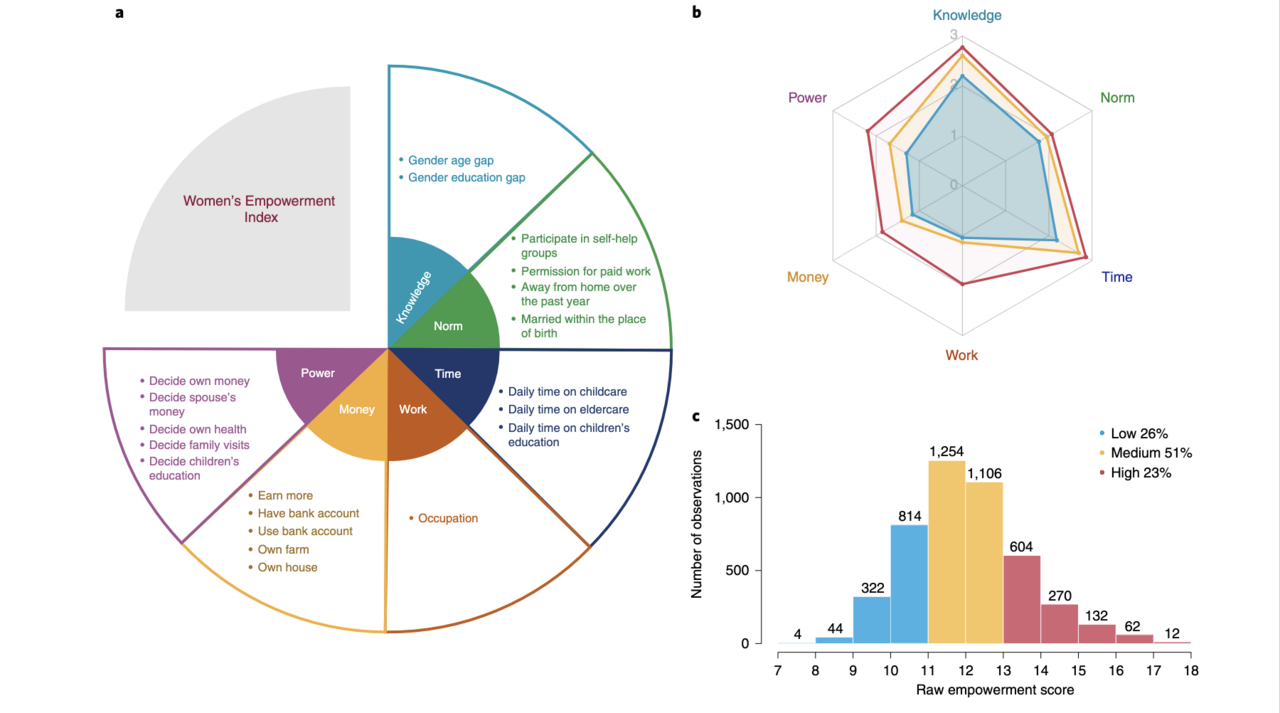 ​This blog post features the paper "Evidence of multidimensional gender inequality in energy services from a large-scale household survey in India" by Zhang et al. (2022) in Nature Energy.