Patterns of gene expression vary across the human cerebral cortex. Here, Misic et al. reveal a ventromedial–dorsolateral gradient of gene assemblies and show that this corresponds to a functional gradient between affective and perceptual domains.

We often speak of DNA as the backbone of our identity. “It’s in my genes” might be an excuse for a bad habit, a source of pride towards a talent, or a simple explanation for a physical attribute. On the other hand, the understanding of our identity is also deeply rooted in our personality: how we behave, how we interact emotionally with the world, and how we think. Somehow, both genes and cognition have become naturally intertwined, although the link between the two is not at all clear. Afterall, how would it be? The expression of genes is a microscale molecular process, occurring in every one of our cells, whereas our behaviour is the output of the complex interactions between areas across our entire brain. This link is precisely what we aim to uncover in our recently published article. We bridge gene expression to cognition and behaviour and demonstrate a direct link between the two. We further identify a pattern across the brain that relates specific groups of genes to specific psychological processes.

The inspiration for this work comes from a sentence in an article written by Andrew S. Fox several years ago:

... identifying the genes that alter expression of the proteins that comprise cells and synapses - giving rise to the patterns of brain activation that underlie complex cognitive phenomena - is critical.”

In other words, there is a natural series of links that begins with gene expression and ends with psychological function. When genes are expressed, they are converted to physical protein molecules that hang around inside our neurons. These proteins are the building blocks that guide each neuron’s activity. Neural activity determines whether two cells will be connected to one another or not. If we zoom out from a network of a couple connected neurons to a network of millions of interconnected neurons, we are now dealing with regions of the brain, each with its own pattern of activity. This brain activity is what drives our behaviour. Altogether, we have travelled from a single gene to a complex, thinking, feeling, acting being.

Our work would not be possible without those who meticulously collect data and generously publish it, making it available for people like us to analyze. To bridge gene expression to psychological function, we used two such datasets: (1) the Allen Human Brain Atlas, which provides the expression of over 20,000 genes across the brain, and (2) Neurosynth, a meta-analytic tool that, based on over 15,000 functional imaging studies, assigns an association strength between every brain region and an array of key words. For our purposes, we focus on a set of words to do with cognition and behaviour: words like “attention”, “anger”, and “sleep”. We use machine learning to uncover a pattern across the brain where certain genes are especially associated with certain behaviours. This pattern (which we also like to call a “gene-cognition gradient” or a “molecular/genomic signature”) reveals two polar groups of genes, behaviours, and brain regions. Each group represents a set of genes that are linked to a set of cognitive processes in certain brain regions.

This, in and of itself, was a very exciting result. We found a mapping between genes and behaviour that could hold its own after we threw a multitude of statistical tests at it. This meant we could indeed find a link between genes and psychology. The next step was to dive deeper into the specific sets of genes and psychological processes that are related to one another. The two sets of terms that were extracted from the analysis revealed an interesting dichotomy: in one group were key words related to emotional processing (“fear”, “emotion”, “mood”), but in the other group, the words were related to attention and perception (“visual attention”, “spatial attention”, “fixation”). In other words, we found that distinct groups of genes underlie perception and mood (Figure 1a).

What were the genes? Unfortunately, each set included around 2000 genes, so distilling the biological meaning of these lists was necessary. First, using an openly available tool, we extracted the primary biological processes related to each group of genes. Second, we analyzed the cell types in which these gene sets were most expressed. Altogether, our final result is the following (summarized in Figure 1): genes (1) to do with creating new neurons (2) that are mostly expressed in the cells of the brain that provide support to the information-processing neurons (3) underlie mood-related processes (4) towards the front of the brain; genes (1) to do with sending a neural signal (2) that are mostly expressed in the neurons themselves (3) underlie perceptive processes (4) towards the back of the brain.

Importantly, the technique we used to link gene expression and psychology knows nothing about the brain but only the data we feed it. This meant our discovery of the link between gene expression and psychology did not come prettily packaged with a biological explanation for why or how it might occur. Again, due to generous data-sharing scientists, we were able to compare our pattern to other patterns in the brain, including attributes to do with brain structure and functional specialization. Here we found that our pattern consistently fell within the structural organization of the brain. This suggests that gene expression is linked to behaviour via brain structure. We were also curious about how this coupling might change over development. We used data that tracks how gene expression changes over human development, and we found that the gene-behaviour link strengthens with development, being strongest in adulthood. These follow up analyses are not only fun facts: they show us that the statistical relationship between gene expression and psychology does seem to have a biologically meaningful foundation.

This project began with a simple question: can we bridge something as small as gene expression to something as expansive as human behaviour? Intuitively, they certainly ought to be related, and we can quantitatively, in a data-driven manner, show that they are. Altogether, we demonstrate that patterns of gene expression do influence the way we think, feel, and behave. 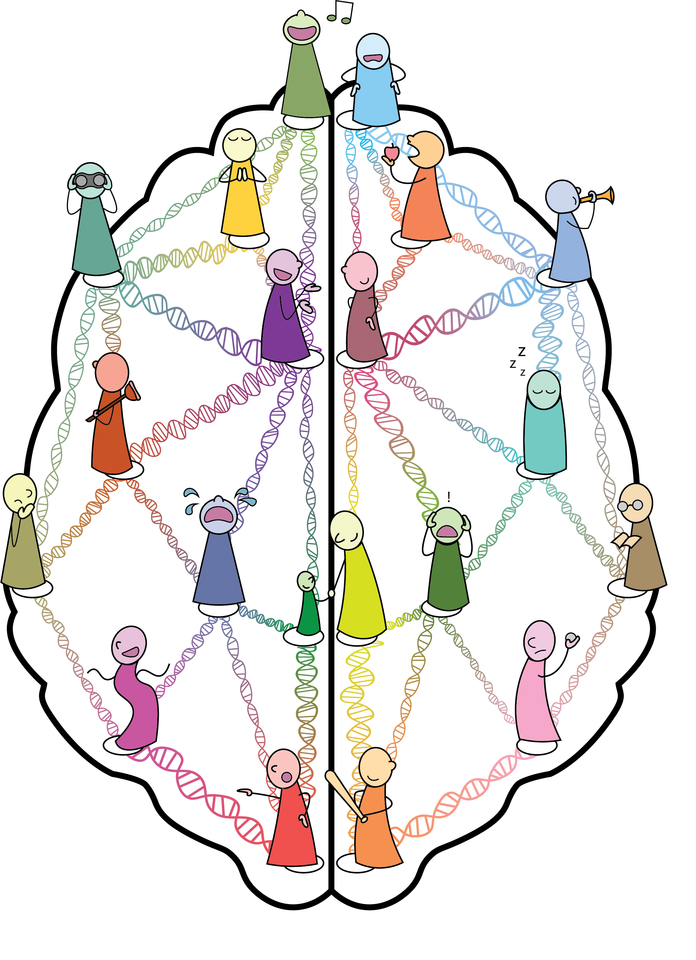