Many authors have argued that some aspects of human history can be described using mathematics. But progress in this area is slow, because 3 different inputs are needed and difficult to obtain: 1) a clear, quantitative observation (to be explained using a mathematical model); 2) a mathematical model able to explain it; and 3) data from independent observations that can be applied to parametrize the model. A human range expansion is defined as the spread of a population (or a culture) in a geographical region. For such a process, well-established mathematical methods exist, and they have been applied to many animal and vegetal range expansions. Can they be also applied to humans? The first attempt is due to Ammerman and Cavalli-Sforza, who in 1971 noted that enough radiocarbon dates of early Neolithic sites in Europe were already available to analyze the speed of this spread quantitatively. They discovered that the Neolithic (i.e., farming and stockbreeding) spread across Europe at a speed of about 1 km/yr from about 9,000 yr ago until about 5,000 yr ago, replacing hunting and gathering. Thus, in this case there is a clear quantitative observation. Can it be explained mathematically? The same authors applied a mathematical model, beginning in 1973. Moreover, they also found independent data to parametrize the model (those data refer to the reproduction rate, the generation time and dispersal distances). The speed predicted by their model (called the 'wave of advance model') agrees quite well to the oberved one (about 1 km/yr). But recently, it has been observed that some human expansions are clearly faster. One example is a spread of herders (called Khoi-khoi) in southwestern Africa, from about 2,300 until 1,100 yr ago. A second example is a spread of farmers (speakers of Bantu languages) from the great lakes area southwards in Eastern Africa, from about 3,400 until 1,400 yr ago. The spread rates were 1.4-3.3 km/yr and 1.5-2.3 km/yr, respectively. They are clearly faster than the spread rate for the Neolithic in Europe (0.9-1.3 km/yr).  Up to now, the only explanation proposed for such fast expansions assumed that some hunter-gatherers, already living in the area, were incorporated in the population that spread (herders or farmers). But this new paper shows that an alternative explanation is possible, if humans are more likely to disperse forward, i.e., into regions that have not been occupied yet (by members of the expanding population) than backwards, i.e. into regions already settled (by some of them). 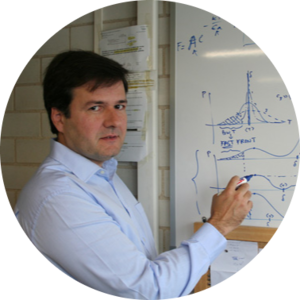