Experimental philosophical bioethics is a new interdisciplinary field that makes use of empirical data to support bioethical analysis. In this study, we present the uses of certain bioethical concepts by professionals, students and the lay public
Aníbal Monasterio Astobiza
Postdoctoral Researcher, Universidad del País Vasco
Follow
Like Liked by Constantin Träger
0

A long held issue in bioethical debates related to end-of-life decisions is the distinction between killing and letting die. Critics of the legalization of euthanasia have traditionally invoked that distinction to explain why withholding life-sustaining treatment (WH-LST) and withdrawing life- sustaining treatment (WD-LST) can be morally permissible, while euthanasia cannot. The underlying assumption is that physicians who refrain from applying life sustaining treatmens –for instance a vital drug- and those who stop them once initiated –for instance extubation from ventilatory dependent patients- merely let their patients die, whereas those who inject a lethal dose of a substance kill them. Advocates of legalization, on the other hand, often use the categories "killing" and "letting die" as if they did not presuppose a moral assessment of the behaviors in question, but only to describe them. They understand that there are morally acceptable and morally unacceptable ways of both killing and letting die.

In an influential study, Cushman and colleagues showed that moral appraisals affect doing/allowing judgments. They examined people’s judgments about two doctors’ behaviours that each resulted in the death of a homeless patient (Cushman et al. 2008). The doctors behaved in exactly the same way, except that they differed in their primary motive: half the participants read about a doctor who was motivated by concern for the patient’s dignity, while the other half read about a doctor holding a derogatory view about the patient, and whose motivation was to save time and hospital resources. This study showed that participants who condemned euthanasia were more likely to indicate that the doctor ended the patient’s life.

While moral philosophers and laypeople commonly use the terms doing versus allowing as if they could capture all possible instances of human behavior, recent research in moral psychology has introduced enabling as a normatively distinct category that people prefer over doing or allowing to describe certain cases where the agent behavior results in harm (Barry and Øverland 2011; Barry, Øverland and Lindauer 2014). A person enables an event (e.g. death) when the event results from an action –not an omission- but without its being the case that there is a complete causal process between the agent’s action and the event: the agent’s action is necessary but not sufficient for the event to happen. According to this definition, WD-LST is a case of enabling death, while WH-LST and medically assisted death are not, the former because it only involves omissions, the latter because it is sufficient for bringing about death.

By applying this type of research to the bioethical context of end-of-life decision making, David Rodríguez-Arias, Blanca Rodríguez, Anibal Monasterio Astobiza and Ivar Hannikainen (2020) have explored whether different uses these terms may be at the root of social and academic disagreements about medically assisted death. In their study, they investigate how health professionals, students of medical sciences and other disciplines think and conceptualize expressions such as "killing", "letting die" and "euthanasia". Medical students and professionals (N=184), as well as students from other disciplines (N=122), were recruited and presented with hypothetical scenarios describing physicians´ decisions at the end of life: withholding of life support treatment (not putting on a ventilator), withdrawal of life support treatment (extubation), and an injection of a lethal substance. Each of these practices were performed by a physician, who behaved either in accordance with the patient’s preferences, or against them. In the experiment, the modulating factor was the consent of the patient, who either consented the intervention or opposed it: half of the participants were given three scenarios in which the physician acted out of respect for the patient´s wish, and the other half responded to identical scenarios in which the physicians acted in an identical manner, except for the fact that the patient opposed the intervention.

After each intervention, participants viewed three sets of statements about the physician’s behaviour, as follows

On the one hand, the results of this research show that both lay people (students) and health professionals use the terms “kill” and “let die “in an evaluative (such as morally charged) rather than simply descriptive way. This would explain why some people characterize some acts, such as withdrawing life support treatment (that intervention involves actions, not simply omissions), as "letting" or "allowing" death; while others describe certain omissions, such as not initiating life support treatment (not offering breathing assistance to a patient who requests it), as examples of "killing". We can therefore conclude from this is that, in employing the categories of “kill” and “let die”, bioethicists and scholars involved in these debates should clarify whether they use these terms descriptively or evaluatively. Otherwise, they may be creating further confusion to a debate already plagued by inaccuracies and ambivalence (Simon-Lorda & Barrio-Cantalejo. 2012).

On the other, the results suggest that the bipartite distinction pitting "killing" against "letting die" appears incomplete. Echoing previous studies’ results on the doing/enabling/allowing distinction (Barry et al. 2014), participants often prefer to describe life-ending interventions as ‘enabling the patient’s death’, when afforded this third option. Further research on ‘enabling’ in end-of-life contexts may bring welcomed nuance to ongoing debates about the distinction between WH-LST and WD-LST.

Understanding the theoretical assumptions of the language used to refer to practices linked to the end of life is particularly important, especially if legal consequences are to be derived from such categories. Future studies using experimental procedures and empirical data (in line with the interdisciplinary field of experimental philosophical bioethics) help to advance in the understanding of social controversies, including those about end-of-life decisions.

Barry, C., and Øverland, G. The Feasible Alternatives Thesis: Kicking Away the Livelihoods of the Global Poor (2012) Politics, Philosophy and Economics

What can Philosophy do about climate action? 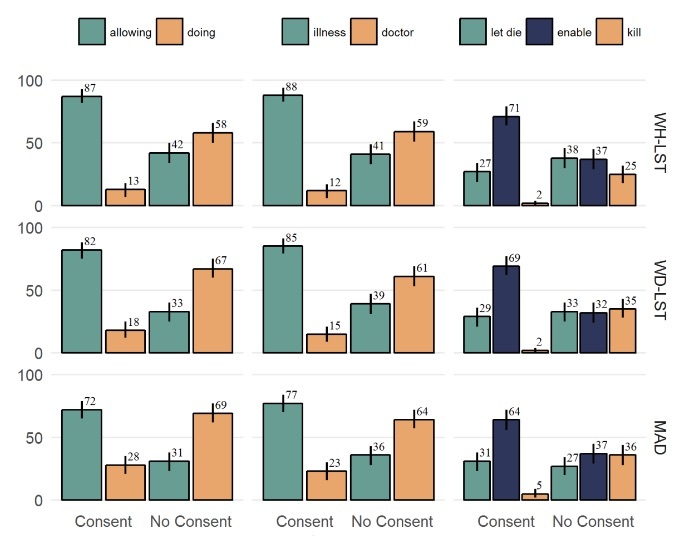 Experimental philosophical bioethics is a new interdisciplinary field that makes use of empirical data to support bioethical analysis. In this study, we present the uses of certain bioethical concepts by professionals, students and the lay public