Behind our series of papers on estimating the value people attach to resilient electric services that can be used to inform local or regional decision-making
Sun Hee Baik
Postdoctoral Researcher, Lawrence Berkeley National Laboratory
Follow
Like Be the first to like this
0

Electric power outages cause losses in time, material, and productivity for individuals, households, businesses, governments, and society. Most disruptions of electric power are short, lasting between two and six hours, and result from local power outages. However, large outages of long duration do occur, causing considerable private and social harm. Recent examples include Hurricane Maria, where many citizens in Puerto Rico went without power for months, and Hurricane Florence, that caused 51 deaths and $24 billion in damages in the Carolinas. These long-duration outages are a concern not only because of the damage they cause, but also because they are becoming more frequent and intense as the result of climate change and other emerging threats such as terrorist attacks on grid infrastructure.

While preventing blackouts altogether is very difficult, emerging technologies that allow the grid to be operated as isolated microgrid islands in combination with distributed generation can provide partial backup service during such events. Such an approach can enhance power system resilience, mitigating the individual and collective consequences of large outages of long duration by providing a small amount of power. The amount of investment individuals and society should spend on such a system depends on their ability to carefully reason about the outage and its consequences.

Our research into the question of how to help members of the public provide reasoned assessments about the value of providing partial backup service during long-duration outages,  that many have never experienced, began in 2013. We started by developing a face-to-face elicitation approach that helps respondents understand what services would and would not be available during a 24-hour summer-day blackout in their homes and communities, their personal load profiles and critical load profiles as a function of time of day (under normal circumstances and under limited availability; see pilot testing photo below with the help of our graduate program administrator Vickey Finney), and the economic losses they may suffer. We applied this method to a convenience sample of residents in Allegheny County, Pennsylvania. We also tested two important effects that have cast doubt on WTP numbers from contingent valuation studies – scope insensitivity and anchoring, and introduced two conditions to check the consistency of respondents’ preferences.

While the face-to-face interview approach produced promising results, each interview took about an hour, meaning the elicitation could not scale to a large population. We decided to adapt the paper-and-pencil survey designs into a web-based survey that automatically informs participants about a widespread long-duration outage and its consequences, then helps them express the value they would place on mitigating the outage with partial backup service.

In our paper in Nature Energy, we have focused on what people would be willing to pay to secure a bit of power during outages caused by the two emerging threats - a massive solar storm and a series of terrorist attacks. Either of these threats could cause a major disruption to the bulk power system without damaging the distribution system, allowing an islanded microgrid to provide partial backup service during the outage.  The first step in our approach focused on ensuring respondents understand what would happen during the outage. In this study we asked respondents to imagine that the outage occurred during a period of very cold weather (where, for example, pipes would freeze if heat was not maintained). We ran three rounds of surveys among those who lived in the northeastern US, including an online sample from Amazon’s MTurk and address-based mail recruitment of randomly selected members of single-family detached households in the Northeast or members of households that were affected by Hurricane Sandy. The responses across these three samples were very similar, with respondents placing significant value on sustaining their own critical electricity-dependent demands ($1.7-2.3/kWh) and supporting their communities ($19-29/day). The study also tested three key hypotheses: 1) whether those with versus without experience of long-duration outages differed in their preferences for partial backup service, 2) whether individuals were willing to support social backup services and services for low-income neighbors in their community beyond their own self-interest, and 3) whether participants randomly assigned to different causes of the outage (terrorist attack versus solar storm) differed in their preferences even when the explicit consequences of the outage were held constant.

These analyses yielded four important findings: 1) the distribution of preferences for partial backup service among residents who had versus had not experienced long-duration outages in the past were strikingly similar, 2) most respondents placed significant value on promoting resilient societies and communities, 3)  respondents with lower income levels expressed a stronger preference for both private and social backup services in proportion to their income, and , 4) that framing the cause of the outage had very little impact on elicited preferences.

The findings suggest that, with a small investment in framing the problem and its consequences, our preference elicitation approach can help individual members of society can express their preferences over rare but consequential events that may happen in the future. A small investment in helping people make decisions can help with societal investments in avoiding and mitigating big problems. We are continuing this work, aiming to develop scalable methods that can be used to help the public value rare but consequential events under different scenarios than the one used in this study. Please stay tuned and get in touch with me and my colleagues if you are interested in this work. 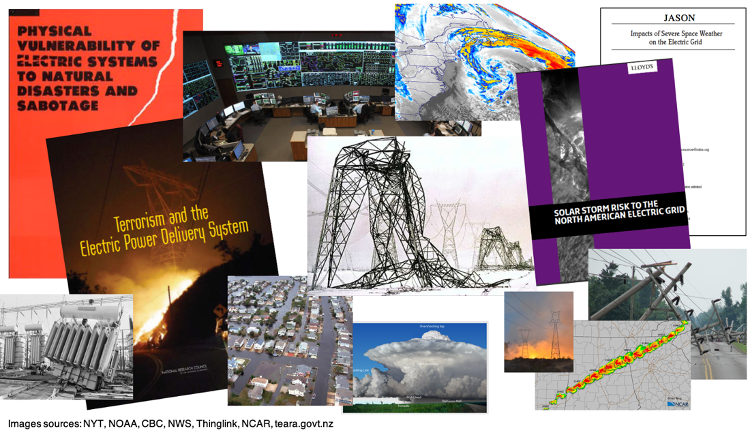