With modern technology, human hunters are no longer restricted to hunt close to their settlement. The patterns of broad hunter movements relative to residency and prey densities have implications for wildlife management – posing a hazard for spread of wildlife diseases.
Atle Mysterud
Professor, University of Oslo
Follow
Like Be the first to like this
0

Hunter movements have implications for how to control emerging wildlife diseases. In northern Europe, hunter residential densities are more closely linked to human than prey density, hunters are largely migratory, and they aggregate with increasing regional prey densities.

In spring 2016, a female reindeer from the Nordfjella mountain range in Norway was diagnosed with the feared chronic wasting disease (CWD). CWD is a lethal prion disease being transmissible among cervids, for which there is no treatment or vaccine. The CWD epidemic in North America was detected among deer in Colorado in the 1960s. CWD has now reached some 26 states in USA and 2 provinces of Canada. CWD is still spreading, causing population declines and comes with huge cultural and economic impact. The detection of CWD in Norway was the first case in Europe and made international headlines. To me, the emergence had a rather personal touch to it. I have hunted reindeer in Nordfjella for many years; the first time with my father some 30 years ago. The annual reindeer hunt for meat and recreation with friends is a much-valued tradition.

CWD was not in my mind when, on the first day of reindeer hunting in 2016, I finally saw the two big males our team of hunters had been looking for all morning. The males were still at a long distance and only visible through binoculars. A beautiful and impressive sight to see how easily and efficiently reindeer move across the high alpine landscape. With the current wind direction, it was a good chance they would come in my direction. However, older males are unpredictable, and they suddenly changed direction when still out of shooting range. I called up another hunter on the radio, saying where the reindeer would most likely turn up, and he was successful. In the evening after the hunt, we all admired the antlers of the reindeer; the severed head was lying in a pool of blood by the parking lot.

One week later, I was at the first meeting of the group gathered by the Norwegian Scientific Committee for Food and Environment with the mission to lay the scientific foundation for how to manage CWD in Norway. Everybody had heard about the new CWD-positive case shot during the reindeer hunt. They had pictures of the hunter and the reindeer. Imagine my surprise when I realised it was the male we hunted a week ago! We had no clue the reindeer was infected. It also opened my eyes to the role of hunters as potential spreaders of disease. Infectious CWD prions are found both in meat and blood. We were hunters from across southern Norway with our boots being exposed to the contaminated blood from the head in the parking lot. We could potentially have spread the disease long-distance with devastating impacts. I was shocked.

I started digging into the literature on hunter movements. It struck me that earlier studies of hunter movements typically place a GPS in their rucksack during the actual hunting, but do not pay consideration to where they, or their hunting dogs, move before and after the hunt. Together with good colleagues, we started gathering and analysing data on broader hunter movements. We found that hunter density correlated more strongly with human than prey density. The lack of correlation among density of hunters and prey was a bit surprising, as we often envision the rural hunter.  Hunter movements extended also to and from other countries and continents.

Our hope is to raise awareness among hunters and managers to how long-distance hunter movements pose a hazard of spreading disease. This is not only relevant for CWD in Europe and North America. With African swine fever spreading among wild boar in Asia and Europe, building a culture among hunters to facilitate disease containment is of key importance. Hunters ought to be perceptive to such new information. 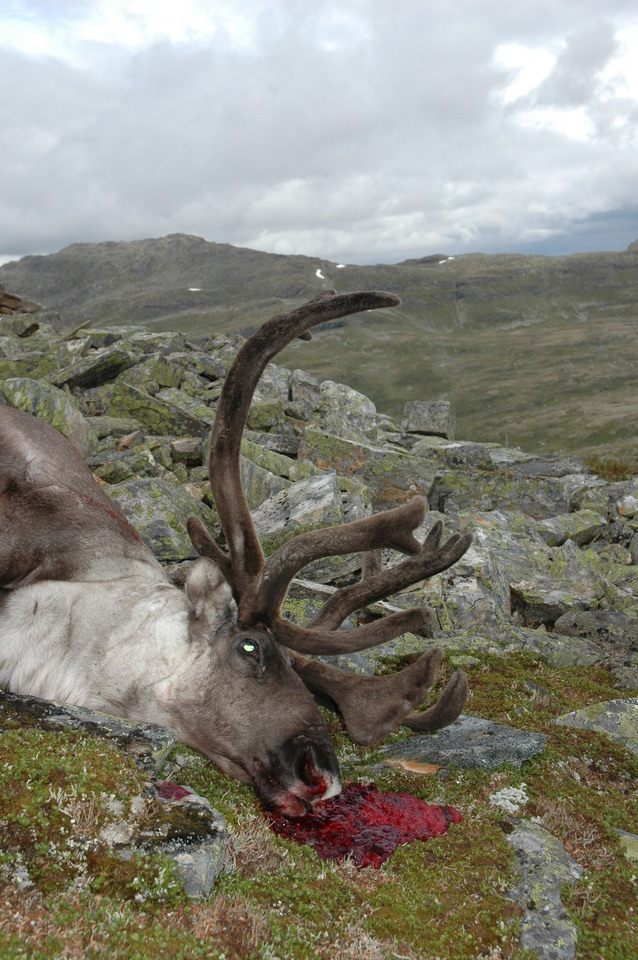 With modern technology, human hunters are no longer restricted to hunt close to their settlement. The patterns of broad hunter movements relative to residency and prey densities have implications for wildlife management – posing a hazard for spread of wildlife diseases.