An illustration inspired a novel method to answer an old theoretical question
Uku Vainik
research fellow, University of Tartu
Follow
Like Be the first to like this
0

Eating too much has become so easy in a modern society. With all the tasty food available, it is a surprise that some people manage to stay lean. Many people feel that they just cannot stop eating, a feeling that has been labelled food addiction since 1950-s . But can we equate the way people with obesity behave with the way people with other addictions behave? Debate on this idea is strong as ever.

These questions were on my mind when I joined Dr. Alain Dagher’s lab at Montreal Neurological Institute as a post-doc. One of my first tasks was to review the behavioural and brain overlap between addictions and obesity together with Alain and two other post-docs, Andréanne Michaud and Isabel García-García. Andréanne uncovered a lot of material and we tried systematising the material the best we could. What helped us considerably was utilising the impulsivity framework from Sharma et al. Mapping the literature to that framework showed that both addictions and obesity have correlations with most impulsivity domains. Similarly, the phenotypes reported similar activity in impulse-control related brain areas. Such overlap suggested a shared neurocognitive profile between them. At the same time, the overlap was based on a narrative review and even then there were discrepancies.

Table 1 from Michaud et al. Summary of similarities and discrepancies between obesity and addiction based on an impulsivity framework.

When the review was almost complete, Alain said, “We need more graphs, people like them in reviews.” So I sought to plot the personality profiles of obesity and addictions to further demonstrate the similarity between them. I was inspired by René Mõttus from Edinburgh, who had previously emailed me a graph on how similar health behaviours are in Estonian Biobank from personality perspective. However, the Estonian Biobank lacked more “interesting” addictive behaviours, like drug abuse. Wondering, where to get the drug abuse-personality data from, I realised that I could recycle previously published personality profiles from the literature! So I looked up the papers we cited in our review, extracted the mean scores on each personality trait for people with addictions or obesity and Figure 2 was born!

Figure 2. from Michaud et al. Personality profiles of obesity and addictive phenotypes according to NEO-personality inventory revised. We present the difference in T-score units between obese minus normal weight group and addiction phenotype group minus control group. On a broad factor level, all phenotypes share higher Neuroticism (high Negative Emotionality) and lower Agreeableness and Conscientiousness (high Disinhibition). However, on a finer facet level, the profiles become less similar. For instance, obesity sets apart from other addictions only peaking at one facet of Neuroticism, and not on all facets of Conscientiousness. Therefore, while there are broad similarities, obesity and addictive phenotypes are not fully similar to each other.

Staring at this figure, with Christmas break looming, I was a bit disappointed with regard to how messy the figure was. The five personality domains on the left looked clear enough – people with obesity or addictions have both high Neuroticism and low Conscientiousness. That was expected, as three of the five domains correspond to Sharma’s dimensions. However, when splitting the five personality domains into facets, the squiggly lines looked a lot messier. Some overlap here- opposing effects there...

And then it occured to me – correlating these squiggly lines will provide a numeric estimate of behavioural overlap between addictions and obesity. Just like genetic correlation between two genome-wide association studies provides an estimate of the genetic similarity of two phenotypes, a personality correlation provides an estimate of behavioural overlap between addictions and obesity. I was finally able to provide a quantifiable answer to the addiction-obesity debate! Excitedly, I started looking for all the addiction personality profiles I could find from the literature, and the first results were in just in time for the Christmas break. After Christmas, the analysis quickly went out of scope of the review and became a separate paper, now published in Nature Human Behaviour (preprint). However, to date the root folder for this paper is called “Michaud review”

I am quite intrigued by how the analysis turned out. We saw that indeed, obesity and addictions seem behaviourally inseparable when focusing on broad domains, like we did in our review. At the same time, comparing facet-level profiles suggests that the overlap is limited - obesity is somewhat similar to addictions, but also different. Therefore, addiction models for obesity are useful to some extent, but that is clearly not the whole picture. 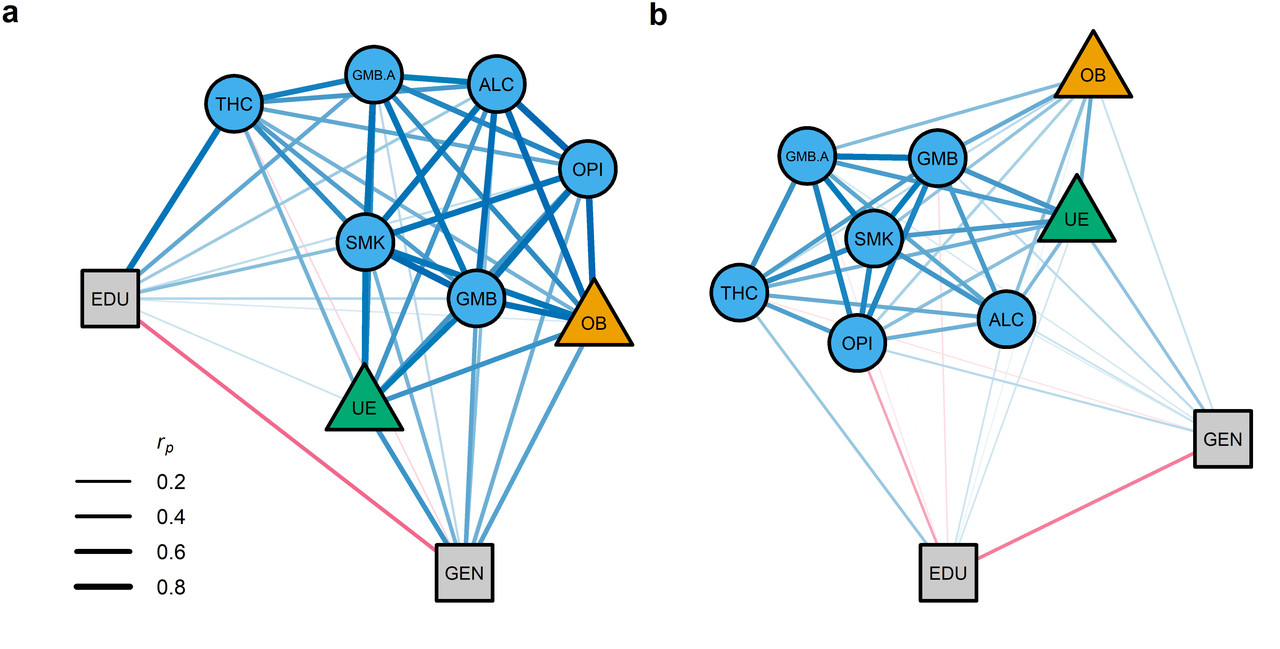