Using multimodal brain imaging measures, we describe the neural dynamics of same-race and other-race facial categorization. The resulting dynamic neural activity predicts racial biases in facial recognition and altruistic intention.
Shihui Han
Prof., Peking University
Follow
Like Be the first to like this
0

While I was hosting a few visiting professors in a restaurant in Beijing in 2006, we talked about our research on empathy for pain  an ability to understand and share others' suffering. Empathy as a spontaneous mental activity is thought to play a causal role in subsequent helping behavior. An interesting question came out of our conversation: if viewing others' pain mandatorily induces empathy and causes help to those who suffer, what would happen to a soldier during a fight against another soldier from the enemy? Would the fight continue if the soldier hurts the antagonist and then empathizes his pain? A reasonable prediction is that empathy for pain of the antagonist, or an outgroup member in psychological term, would be down-regulated during fight.

After this conversation I started to work with my students to test this prediction by measuring brain responses to same-race and other-race individuals' pain. Race is a novel social marker of ingroup or outgroup in real life and is easily manipulated in psychological experiments. We published the first study in 2009, which revealed decreased brain responses when viewing painful stimulation applied to other-race than same-race individuals. This effect, replicated later by researchers around the world, provides neuroscience evidence for racial ingroup favoritism in empathy. The findings suggest potential neural underpinnings of racial ingroup biases in decision-making in numerous social domains, including employment markets, clinical treatment, and jury judgments.

When tracing the origin of racial ingroup bias in empathy and behavior, we realized that to categorize others into same-race or other-race groups provides a basis for the bias. I published a conceptual model in 2018 that posits that categorization of a person as a member of a social (e.g., racial) group results in ignorance of his/her feelings as an individual and reduced empathy for outgroup pain influences later decision making. When I started to test this theoretical hypothesis with my graduate students, Yuqing Zhou and others, we realized that there had been numerous brain imaging studies that focused on race. However, most of the published work compared brain responses to same-race versus other-race faces. The paradigm and findings actually examined brain activity that differentially responds to faces of two racial groups. These studies did not characterize brain responses to commonness shared by different individuals of each racial group, which essentially underlies racial categorization. Besides, the previous approach does not allow researchers to construct separate neural models of categorization of faces of each racial group.

We target these questions by developing a new paradigm. Our paradigm focused on brain activity in response to faces of each racial group when these faces are viewed more or less frequently. This paradigm allowed us to estimate repetition suppression or habituation of neural responses to faces of different individuals of one racial group. This method also controls for neural responses to perceptual features of faces that may be different between faces of two racial groups but are not necessary for racial categorization.

We first examined habituation of neural responses to Asian, Black and White faces in both Chinese and White students using electroencephalography (EEG), which has high time resolution but low spatial resolution in estimation of brain activity. Our initial findings are interesting: habituation of neural responses occurs earlier to other-race faces but later to same-race faces in both samples. These results suggest earlier racial categorization of other-race than same-race faces. We then localized these effects using functional magnetic resonance imaging (fMRI) to different brain regions. Thereafter, we were able to employ magnetoencephalography (MEG) to assess the exact time courses of habituation of neural responses to other-race and same-race faces in different brain regions. Multimodal brain imaging results helped us to built separate dynamic models of categorization of Asian, Black, and White faces. Above all, the brain activity involved in spontaneous racial categorization of other-race faces predicts individual differences in racial biases in subjective feelings of others' pain and intention to help those who suffer.

Our findings shed new light on distinct neural mediators between perceived individual faces and a collective racial group. I hope that these findings can lead to deeper understanding of racial bias in social decision-making. I look forward to future research on how psychological and neuroscientific studies of racial categorization can provide insight to public policies for intervention of real-life racial bias and discrimination. 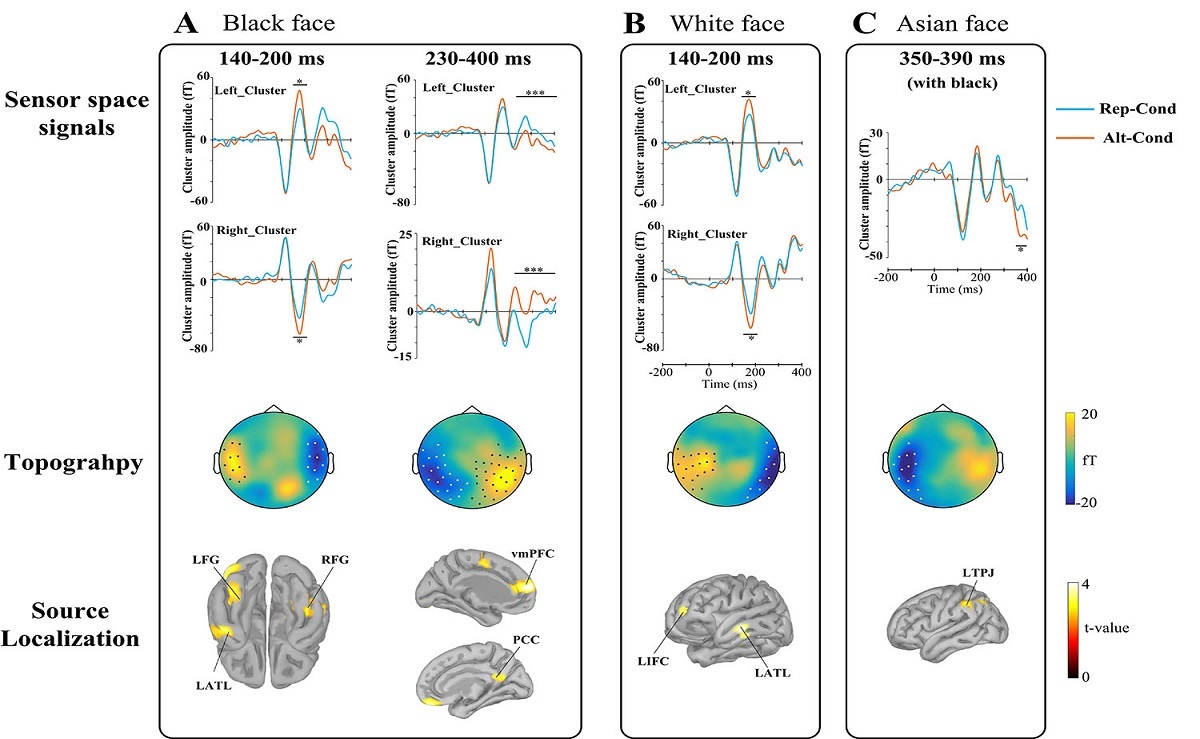