People underestimate the environmental impact of their food choices

How many minutes does a 100-watt incandescent light bulb have to be on to equal the carbon footprint of a serving of beef?

In 2013, Duke University launched an amazing new initiative called Bass Connections. According to the grant application, Bass Connections was created to “facilitate linkages across educational levels, across academic units on campus, and between campus and society”. I saw it as a great opportunity to extend my postdoc while starting several exciting new interdisciplinary projects. I helped form a team that included faculty members in the Fuqua School of Business and the Nicolas School of the Environment. We then recruited three students who were studying Environmental Management, Economics and Public Policy, and Psychology, respectively.

Our initial proposal – titled "Routes to Energy Saving" – included several ideas but none specifically mentioned food. However, when the group finally sat down together the idea of food came up. This is one of those rare cases in which we can reconstruct where an idea came from because we took detailed meeting minutes. Prof Gavan Fitzsimmons mentioned that Duke was planning to start a centre focused on food research (it later became the World Food Policy Center). He also mentioned that he knew someone at the company Beyond Meat who wanted to learn more about how to encourage people to move away from eating meat. This was a problem we could all get behind. The meeting set our direction.

The Beyond Meat connection fizzled out but, in any case, each student formed a research question and plan. Marie Komori examined whether it was more persuasive to present multiple arguments in the same or different domain. The results were intriguing but not clear cut. Gabriel Goffman examined whether it was persuasive to engage in energy-saving action when the benefits of such actions were aggregated over many people. The results of this research were promising and a paper related to this idea is now forthcoming in the Journal of Experimental Psychology: General. Shajuti Hossain examined the degree to which people underestimated the energy consumed and greenhouse gases emitted by consumption of a range of foods.

The research that Shajuti began in 2014 eventually developed into the paper "Consumers underestimate the emissions associated with food but are aided by labels", which was published in Nature Climate Change this week together with Professor Richard Larrick and Associate Professor Dalia Patino-Echeverri. You can read a good summary of the research here.

The publication of this research highlights three important points.

And the answer to the question posed earlier? 2,481 light-bulb minutes*! Now that’s food for thought.

* Actually, the process of figuring out the carbon footprint of a food item is difficult, expensive, and fraught with uncertainty. According to the life cycle analysis (LCA) software and carbon footprint analyzer FoodCarbonScope, which is produced by the company CleanMetrics, the production and transport of 1 kilogram of bone-free beef in the United States produces approximately between 12.9 and 17.3 kg CO2 equivalent. For our light bulb equivalent estimate, we took the the arithmetic mean of the LCA sources we could find and assumed a serving of beef was 0.22 lbs. Please refer to our Supplementary Information for additional details. 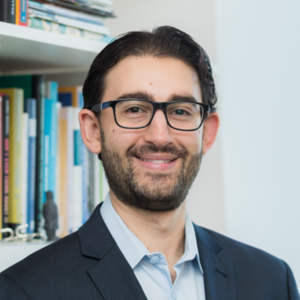