You might not be able to tell, but the non-descript red building (pictured above) housing the wells and office of Boise-Warm-Springs-Geothermal-District was built in 1890s. It housed the rig for one of the first geothermal wells ever drilled anywhere in the world. The well and the system of pumps and pipes they relied on to supply heated water from underground to the homes on the Warm Springs street still stand. The water is still being delivered; the heat is still being extracted.

On the first day of the conference, Randall Morgan-Greene from Reykjavik University talked about Iceland’s geothermal revolution and how it can serve as a potential model for developing nations to address their energy access problems. Nine out of 10 houses in Iceland are heated by geothermal energy and nearly all the energy the country consumes is renewable.

The tour of the Warm Springs Geothermal District wells and this talk thematically bookended what for me emerged as one of the central themes of 8th Annual Energy Policy Research Conference: How to make the best of legacy systems while moving forward with the energy transition and capitalizing on the most precious of natural resources at our disposal.

The conference was held September 6-7 at Boise State University in Boise city; the fastest growing city in America today and home to the famous blue football field (they’ve apparently copyrighted it). The presenters represented a diverse mix of academics and practitioners both from the technological and social sides of energy studies.

The first session focused on the expansion of Regional Transmission Organizations in the US West and highlighted the difficulties administrators have to face dealing with legacy distribution, market mechanisms and new renewable technologies that bring additional variability to the source. It was a fascinating reflection of how the energy market evolves in the presence of competing interests and stakeholders. In a related talk later in the day, Jacob Tuttle from the University of Utah used a study of a thermal generator’s participation in an energy imbalance market to illustrate the impact of new market mechanisms and renewable penetration on older players.

Four national labs were represented at the conference and many talks focused around energy modeling and incorporating new variables into integrated modeling or energy expansion modeling exercises. For example, Brian Sergi from Carnegie Mellon talked about integrating climate and health objectives into capacity expansion modeling. Other talks explored interdisciplinary themes in a world where systems and entities are constantly struggling to embrace the new while trying to avoid the violence of chucking away the old. Kathryn Walsh from Montana State University presented qualitative research on how environmental and social costs have been externalized by the coal bed methane industry in Sheridan County. Seth Blumsack from Penn State University critically analyzed the fuel security narrative that is being used to justify higher costs for fossil fuel delivery initiatives. Sarah Mills from University of Michigan showed how demographic and other data can be used to predict opposition to wind energy projects. Stephanie Lenhart of the Boise State Energy Policy Institute talked about how municipal utilities and cooperatives were tackling the transition to renewables in legacy administrative and policy environments.

As a Nature Energy editor, these presentations were interesting to me because they looked at their subject matter either from a very holistic perspective, trying to leave no variable omitted, or from a unique specific angle that hasn’t been explored enough in the literature. Because energy touches all aspects of our life, Nature Energy is a natural home for work that integrates ideas from multiple disciplines. But we also continue to seek work grounded in traditional narrative social sciences, behavioral sciences, economics and social and infrastructure systems modeling.

The Warm Springs Geothermal District office retains one of the first electric pumps that was used to pull warm water out of the ground. It looks in excellent shape, but standing at more than six feet tall is entirely too big to be of use in the modern world. The city’s new geothermal district office bought the pump but are now struggling with how they can best put it to use, perhaps even as an educational exhibit.

Listening to many of the talks, I couldn’t shirk the feeling that in order to move the energy transition along we have to find better ways of resolving the friction between old systems and new, identify and find what’s useful. Keep it, build on it. The rest should be relegated to educational exhibits sooner rather than later. 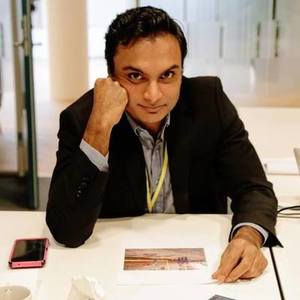